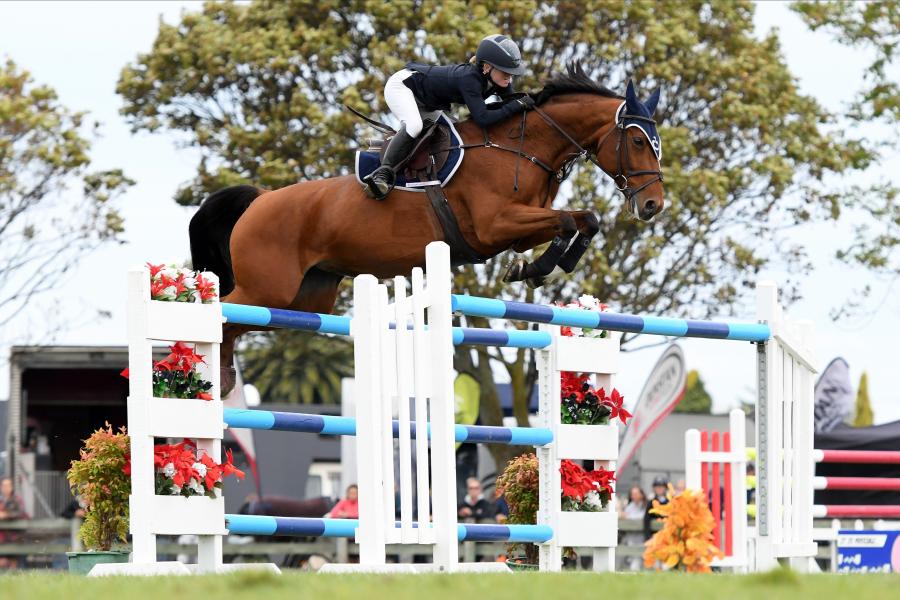 Taupo teen Annabel Francis’ golden showjumping season has continued, this time at the Glistening Waters Series Finals Championship Show in Masterton where she won three series crowns as well as picking up minor placings.
The 18-year-old from Taupo has added the POLi Payments Premier League Series to an already bulging trophy cabinet that also includes the POLi Payments FEI World Cup NZ Series from earlier in the season, and the FMG Young Rider Series and the VDL and Equibreed Top Ranking Mare award from the series final show at the weekend.
“I just had a feeling this would be my season,” said Annabel. “It really has been a good one.”
She lined up in the Premier League with two – her imported bay mare La Quinara as well as her feisty grey Carado GHP however, the later picked up seven penalties in the opening round so didn’t come back for the second.
“He was a bit spooky and we had a bit of a miscommunication,” said Annabel. “It is a shame because he has been jumping so well. I thought he may have had it in the bag but it wasn’t to be and Queenie came through.”
Annabel knew she had to be double clear and either first or second to take the series. Coming into the grand final she was one and two with her mounts but had Tegan Fitzsimon (West Melton) poised to pounce.
“Queenie didn’t touch anything out there – I am really proud of her.” Both of Annabel’s horses are challenging rides, but the pint-sized pocket rocket says there is never any room for doubt.
“To win the series is important for me but also those in my team and around me,” said Annabel. She’s talking about her mum Debbie, sister Charlotte, coach Jeff McVean and groom Briar Sykes.
“A lot of work goes on behind the scenes and it helps that I have good horsepower too.”
The Premier League was a superb 12-strong field featuring most of New Zealand’s top riders. Twelve contested the opening round over a solid 1.5m-1.6m Gerrit Beker-designed track with seven on four faults or less coming back for the second round. Clear rounds came from Sophie Scott (Wellington) and Glenbrooke Rich as Roses, Tegan Fitzsimon (West Melton) aboard Windermere Cappuccino and Annabel.
The second round saw clears from Nicole White (Invercargill) on LC Samson and Logan Massie (Dannevirke) with Bravado Ego Z but both carried four faults from the opener. It came down to Tegan and Annabel who both kept clean slates, but Annabel’s 64.67-second time was just over three seconds faster than Tegan. Both women rode beautifully controlled and considered rounds. Nicole filled third spot with Logan fourth, Sophie fifth and Maurice Beatson (Dannevirke) aboard Central Park in sixth.
The ESNZ Horse Grand Prix Series was won by Tegan Fitzsimon and Windermere Cappuccino, who also took the ESNZ Eight-Year-Old Series, with Keira Page aboard Redcliffs Colour Me In taking out the Country TV Pony Grand Prix Series.
Around 500 horses and their riders travelled from all over New Zealand to compete at event. With the Land Rover Horse of the Year Show cancelled in March due to COVID, this became the big focus for many.
It was also the last big show for one of New Zealand’s course designers, with Gerrit Beker calling a day on his 30-plus year career. It was the last competitive outing too for other horses and ponies, including former Pony of the Year Tony the Pony and six-time winner of the Show Hunter of the Year, Kiwi Motto who have both retired.
It was a dream run for Antonio Matangi (Levin) in the show hunter section, winning both the NRM Open High Points and ESNZ Show Hunter Amateur High Points series, as well as placing second in the Petticoat Lane Performance Horses Adult Equitation Series with Shoeshine Polish.


Annabel Francis and La Quinara fly to victory in the grand final of the POLi Payments Premier League Series at the Glistening Waters Championship Show in Masterton. Photo by KAMPIC