"Old Bill was what we called him. He ended up living quite near to where I had my forge. He was originally from Tokoroa way. He’d been battered and flogged as a youngster when they were making him pull the heavy logs out of the bush. They were clearing the land and tree felling. Thinning out the bush and making forestry blocks. They used horses a lot down there in the seventies anyway. And eighties. That’s when he would have learned to mistrust people. Very much so!
Someone had him on Waiheke Island after that and they couldn’t handle him. They probably bought him as a riding horse or maybe to pull a cart and they couldn’t manage him. Then he ended up grazing near to me where I had my forge. The lady who bought him couldn’t get anyone to do his feet. They called me in because they could only get the front feet done and he wouldn’t let them near his back end. He’d just lash out at you. I learned to handle a horse when I was young. From when I was twelve year old I could break it in and mouth it and teach it to go in harness and drive it. You got to get their confidence. So once they’re confident in you and they know you’re not going to hurt them, they just give themselves to you. And that’s how I got round him.
He’d let me do his feet. He’d pick them up for me when I’d click my tongue and hold them up. Strangers couldn’t get round him though. Even when I got hurt one time, not by him, and I couldn’t do the trimming, I’d hold his foot in my lap and I’d get my farrier mate to come round the back and he’d be able to snip from the back. It was OK by Old Bill so long as I had his foot in my lap. Then he was fine. But no one else could hold it." 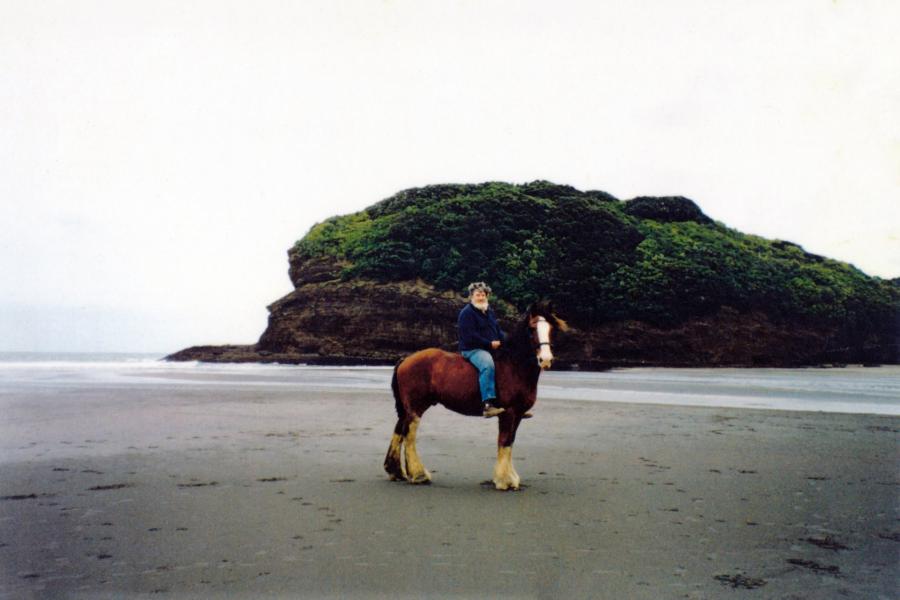 “Old Bill had cobbered up to me. He’d be way up the back feeding and he’d hear the truck coming and he’d know it was me. He’d come cantering down the paddock calling out to me and he’d stand at the fence and wait. Then I started riding him. I’d ride him down Valley Road and back up again. Bareback of course. Then the couple who owned him were having problems and they split. But I got to keep Bill. And I found other grazing for him.
I already had another Clydesdale that nobody wanted, and he was called Clyde. I had Bill and Clyde. So Bill had his Clydesdale mate and I had the two of them. I got them into harness and a friend of mine who was the president of the NZ Clydesdale Society, he went to school with me, he came up and we put harness on Bill. A collar and chains on and we had him pulling logs up in Valley Road and then from there we put him in a sledge and he pulled that. But he was a bit too quick so we flagged that and I ended up with him just as a riding horse.
I owned Old Bill for many, many years. Then I lost my grazing and we shifted him out to a farm where he was an ornament horse. Just a nice horse to look at in the paddock. He was very old by then and he was happy. I kept visiting him to do his feet. He was great Old Bill. He was a wonderful old horse. A real character.”