Bird and Cassina Fly to Victory in World Cup at Taupo 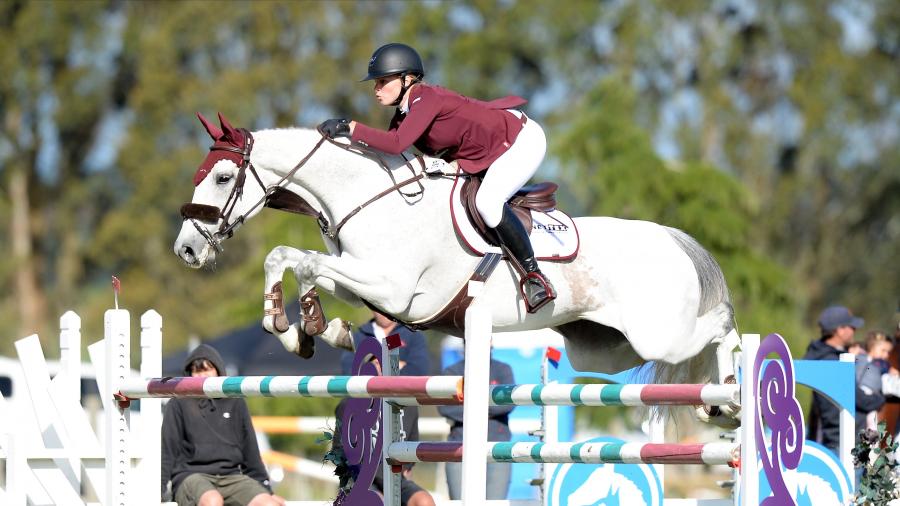 Bird and Cassina Fly to Victory in World Cup at Taupo

Kimberley Bird and her 10-year-old mare Cera Cassina bagged a career highlight this evening with victory in the fourth round FEI World Cup at the Taupo Christmas Classic.
It was just their second start in New Zealand’s toughest showjumping series with 13 of the nation’s best lining up to be challenged by the Gary Sinclair-designed course. And challenge them he did, with none going clear in the opening round. Sitting on four faults were Kimberley (Ashburton), Melody Matheson (Hastings) aboard Cortaflex Graffiti MH, Robert Steele (Dannevirke) on LT Holst Bernadette and local teen Briar Burnett-Grant with Fiber Fresh Veroana. Six combinations on eight faults and less came back for the second round where Kimberley notched the only clear of the class to finish on four faults in a time of 65.92 seconds. It put all the pressure on Robert Steele and Briar Burnett-Grant. Robert added four at the triple bar and it looked like Briar was going to take the class on her bouncy 11-year-old roan gelding . . . until the last fence fell. However, she still held on to second place with her speedy 62.99-second time, with Robert third in 68.4.
“What just happened,” said a stunned Kimberley, who has been campaigning in the North Island since mid-November. “That’s just amazing. The mare really stepped up for this class and honestly, I would have been happy with second. It is very surreal.”
Twenty-three-year-old Kimberley is in her fourth season with the grey Holsteiner. “She can be difficult and a bit of a hot head so you’ve got to work with her. I thought that course would suit her though, being big and spacious with nice forward striding.”
She extended a big thanks to her mother Kate who was travelling with her and her dad Alan. “It is a huge team effort.”
The World Cup Series now moves to Dannevirke early January for the grand final where there are points-and-a-half on offer. However, just the best four scores count for riders, and each of the four in contention for the series crown carry a drop score.
The winner of the league has the opportunity to represent New Zealand at the World Cup Final in Las Vegas next year.