Williamson Winging Her Way Back to Aussie for WC League Final


Williamson Winging Her Way Back to Aussie for WC League Final

Wendi Williamson is heading back across the Tasman to take on Australia’s best in the FEI World Cup Pacific League Final at the Serata Equine Victorian Dressage Championships next week (December 12-15, 2019).
The environmental engineer from Kumeu is no stranger to tackling the top of her sport – in 2017 she and the late Dejavu MH won the Pacific League final and went on to compete at the FEI World Cup final in Nebraska, in the United States. In October she and Don Amour MH were second in the Grand Prix at the Sydney CDI-W and then set an Australian Grand Prix Freestyle record to take the class, win the qualifier and stamp her initials on the Australian National Dressage title.
She hadn’t planned on competing in the final but says it is important to take opportunities when they present themselves. “It takes such a long time to get to this level and you need to be committed to it,” she says. “I really did love going to the World Cup Final – it was an amazing show and when it comes down to one class, anything can happen on the day. If we don’t go, I may regret it.”
She is under no illusion this next class will be a walk in the park. “It is a star-stacked field,” says Wendi.
Lining up in the class are Rozzie Ryan aboard both Adonie and Jarrah R, Dirk Dijkstra and AEA Metallic, Lesley Anne Taylor aboard Amicelli Gold, Pauline Carnovale and Captain Cooks, Lone Joergensen and Corinna, Sally Rizzutto aboard Diamond Star, Holly Cutter with Diva Royale, and Fiona Selby and Tacita.
“It is very difficult to beat Rozzie (Ryan). At the CDI in Sydney in May I was second to her in both the Grand Prix and the Freestyle – she just seems to be able to pull it off very consistently. Every time I go over there (to Australia) I feel they are getting better. The improvement from Boneo to Sydney for Lone (Joergensen) was incredible, so this will not be easy by any stretch of the imagination.”
However, her 13-year-old horse is feeling very good. “He is certainly good enough to be there and I will be giving it a shot. I do think you have to have quite a bit of toughness to go and do this in the first place, and you need a bit of luck and all the stars to align (horse, rider and judges). Every time I get on the plane to go there I think ‘what am I doing?’. When it goes well you know just why, and when it’s not, you wonder what the point is. I am in it to be the best I can be and to compete internationally and the good certainly outweighs the bad.”
Always cool as a cucumber, Wendi says she never feels excitement as she heads to a big event like this. “Excitement to me means expectation and I don’t want to have any expectations. Until you put your foot in the stirrup you don’t know how it will go on the day.”
It’s a fleeting visit for the combination, flying in on Wednesday (December 11), competing on Friday and Saturday and then home.
“It is interesting,” says Wendi. “You spend so long getting them to Grand Prix and from then on it is very slow progress. If you have things to change, it seems to take a long time.” It is also important to manage your horse’s aging process too. “I honestly do feel I can keep improving him though. It would be a hard time if you get to a point where you can’t do that.”
Wendi usually buys her horses as foals and asked Judith Matthews if she could buy Don Amour MH after seeing a photo of him as a baby, however it wasn’t until he was three and partly broken that he finally joined her stable. Don Amour MH is by Don Frederico, out of Adelheid (by Anamour).
The winner of the FEI World Cup Pacific League Final has the opportunity to compete at the 2020 world final in Las Vegas in April. 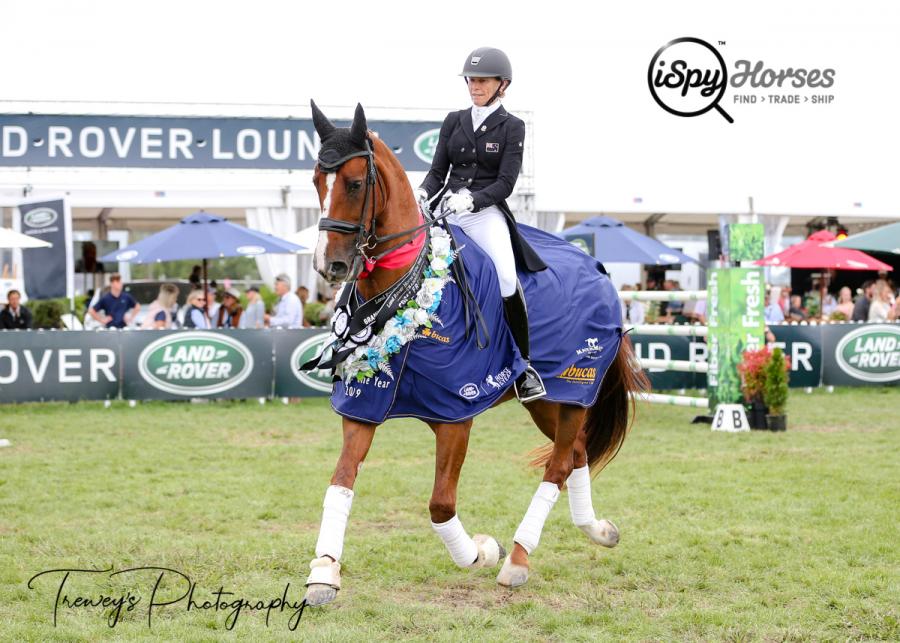