The Aussies have today made a clean sweep of the opening qualifiers in the Gold, Silver and Bronze tours at Takapoto Estate Show Jumping. James Arkins and his gorgeous stallion Eurostar took the honours in the Gold with Amelia Douglass winning the Silver aboard Upperclass Z and the Bronze with Cassis Z Ten Haven.
It is early in the second week of competition at New Zealand’s premier boutique event, which was held in near perfect conditions on the shores of Lake Karapiro near Cambridge. The top 20 from each of the qualifiers are now through the finals, with those who missed out vying for a slot tomorrow. The Silver and Bronze Tour finals are on Saturday with the Gold on Sunday.
Today’s Gold Qualifier saw a quinella from the Australians with James Arkins and Eurostar the winners and Tom McDermott second aboard Elegance De La Charmille.
Twenty-four started the class with five coming back for the jump-off over another beautifully designed and technically challenging Michel Ismalun course. First out was Tom aboard Elegance De La Charmille who won the Grand Prix in the opening week of Takapoto. Unsurprisingly, the combination came home clear in a cracking 35.53-seconds. The next clear came from James and Eurostar. James knew only too well it was his countryman Tom he had to beat and flew around in 34.5. “I was lucky I got to see Tom go first – if it had been the other way around, the result would have probably been reversed,” he said. “I did one less to the combination and one less to the last – that’s where it was won.”
James loved the course. “It was great. It was a good starting height,” he said. “It was strong enough without being too big. Everything came up quite quickly and you had to ride it how it was built to be ridden.”
It is the first year James has ridden at Takapoto. “I came here last year for a look and it is just world class. It is equal to any of the best in the world.”
He was rapt with his seven-year-old stallion. He’s had the English-import since he was four and have notched some serious results including Champ of Champ as a youngster, Australian mini prix champion and futurities wins, among many more.
“He has the most incredible nature,” said James. “This is a bit of a step up for him. He has jumped up to 1.5m at home but will be stepping up to bigger tracks at bigger shows this year.”
His “ultimate” goal is FEI World Equestrian Games in 2022. “I think this is the best horse I have ever ridden. He is everything  you want in a top level horse – I just love him.”
In the Silver Tour Qualifier  the 44-strong field was whittled to five for the jump-off where Amelia and Upperclass Z had to benefit of being the last to go, and despite a couple of close calls, flew home to take the win in 39.84-seconds. New Zealand Olympian Clarke Johnstone (Matangi) was second aboard Nick Brooks’ Versace C also notching a stunning clear but in a slightly slower time, stopping the clock at 40.15 seconds.
Amelia Douglass led the way in the large Bronze Tour Qualifier field, this time taking the victory aboard Cassis Z Ten Halven. The two-phase class attracted 69 entries, with Amelia coming home with a slick double clear in 32 seconds. Aussie Melissa Blair and Gigant Z were second in 33.83 seconds. The top 10 were all double clear.
The show continues through to Sunday. 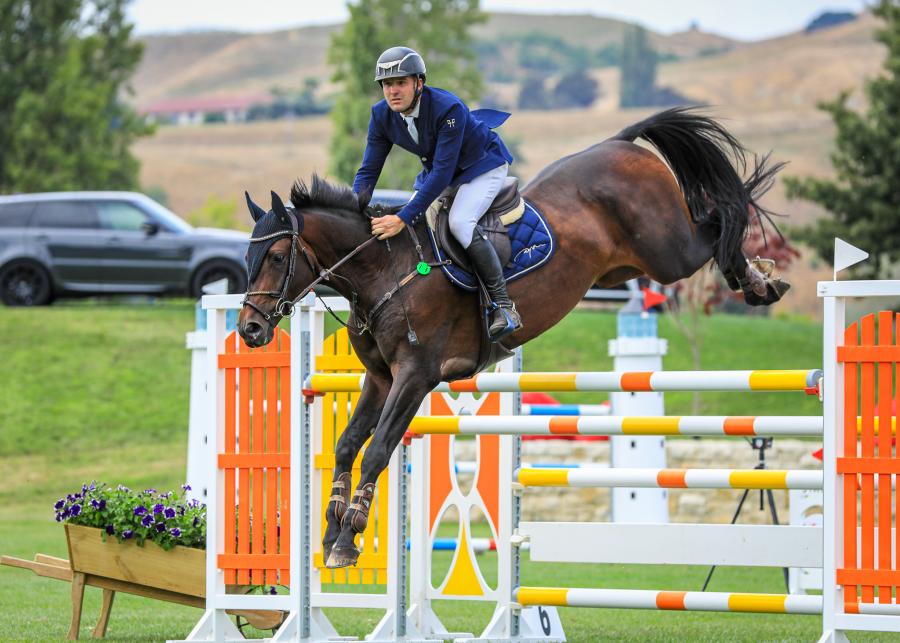